Shannon based Company Ei Electronics is pleased to announce its sponsorship of Treaty United FC for the forthcoming season. 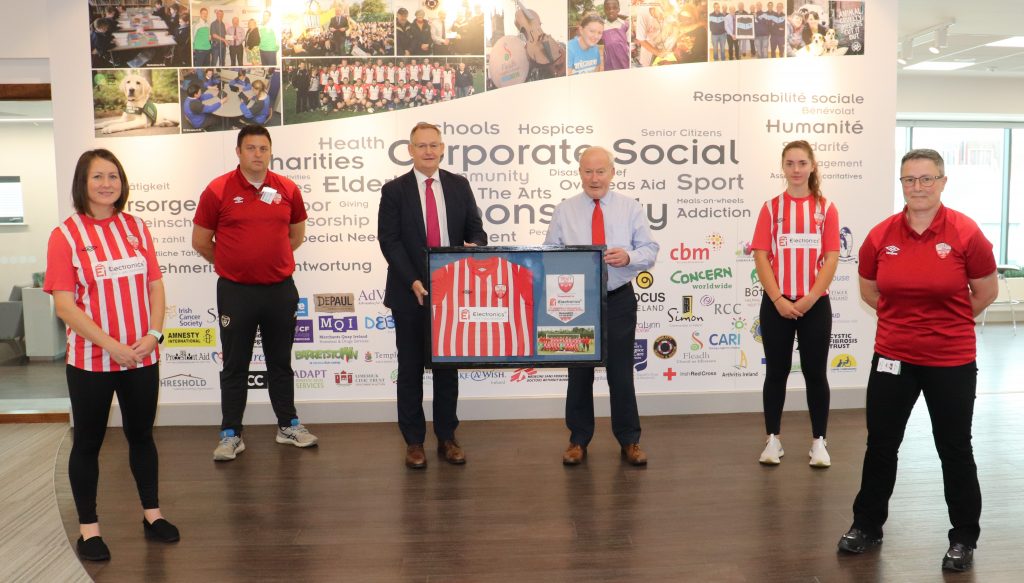 Mayor of Limerick City and County Michael Collins recently launched Treaty United’s 2020 Season, unveiling the new Ei Electronics sponsored club Jersey. The new Board is led by Conn Murray, and at the launch, he announced plans for the coming season working collaboratively across the Mid West Region to deliver senior football.

Commenting on the sponsorship announcement at the Ei Electronics Campus in Shannon, CEO Mick Guinee said, “We are delighted to support Treaty United at both Senior and U17 levels this season. Particularly this year, with the challenges that COVID-19 has brought to the sporting community, we are mindful of the role we can play in assisting and promoting sport in our region.”

Led by Conn Murray the new Board also comprises of Lorraine Counihan, Mary Shire, Mike Aherne, John Fennessy, John Hannon, Barry Hogan, Dave Mahedy, Dan Neville, and Sean O’ Brien.  The team has already got off to a very impressive start. After losing in a hard-fought opening game against league champions Peamount they have clocked up two impressive wins against DLR Waves and Bohemians in the last 2 weeks.

“I’m delighted that Ei Electronics has come on Board to sponsor Treaty United. It has taken a huge team effort to get this far, we are delighted the women’s representative sides at U17 and senior level are looking forward to their new season’s. I’m thrilled with the level of support they have already received and I’m extremely happy that at Board level we have secured the support and energy of key figures to bring a fresh outlook in re-energising senior football in Limerick. We look forward to working with everybody who has an interest in developing football in Limerick.”

David Rooney the Senior Team coach noted “Our partnership with Ei Electronics is a major boost for Treaty United and in particular to Irene and I as managers.  The partnership has opened up many opportunities and we have great pride in representing the club and Ei Electronics each time we pull the jersey on. I can’t thank them enough for their commitment to us.”

“Ei’s Electronics takes it’s Corporate Social Responsibility very seriously with one of our top priorities being community and region. We believe our commitment to Treaty United will help build and sustain senior soccer in the Mid West region for many years to come.”