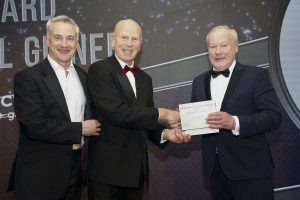 Ei Electronics founder and CEO Mick Guinee was recently the recipient of the Irish Manufacturing Research (IMR) Lifetime Achievement Award. The annual Award recognises a person who has “throughout their career demonstrated the ability to navigate change and innovation, and through their growth and success represents the very best in Ireland’s manufacturing industry.”

Having joined the General Electric owned Ei Company in 1981, Mick was appointed MD in 1983 and has since led the company to become one of Ireland’s largest indigenous multinationals. On receiving the award, Mick paid tribute to the Ei employees who have contributed to this success over 30 years and, highlighted Ei as an example of how Ireland can continue to compete on a global stage when it comes to manufacturing.

Mick spearhead the Management Buyout of GE’s Irish manufacturing operation in Shannon in 1988 which led to the creation of Ei Electronics. With 100% of manufacturing and other key strategic functions co located in Shannon, today the Company is one of the largest employers in the region, and a leading European manufacturer of Fire and Carbon Monoxide detection products for the residential sector.  Currently with over 800 employees, and a total turnover of €236 million, the company exports to 30 countries worldwide.